Cover letter mistakes – are they a dealbreaker?

While attending a good friend’s bridal shower yesterday, the talk at our table turned to the job search. There were two people with recruiting experience at the table, ready to weigh in. The bridesmaid to my right started to tell a pretty funny story about a big cover slip up. It sounded very familiar… and we all have probably made similar cover letter mistakes…

In the midst of applying to multiple jobs, she put together what she thought to be a great cover letter. She slightly altered it to fit the 3 different companies she was applying to and then proceded to proofread it “about 100 times”. She sent it off. That was that.

A few weeks later she hadn’t heard back but pressed on and decided to apply for a few new jobs she was interested in. When going back to use the same cover letter she noticed something slightly alarming. Instead of talking about all of her “great work with various public schools” she actually referred to her great work with “pubic schools”.

We all starting cracking up – definitely an unfortunate (but easy to make) mistake. Since she hadn’t heard back from any of those 3 companies, the question was posed “is this typo preventing me from getting calls?” In general, will cover letter mistakes be a dealbreaker?

The recruiter at the table jumped in.

“It’s probably okay. It’s possible no one even noticed, or read it.” I quickly agreed, “I wouldn’t worry about it too much. It’s an innocent mistake and I think most recruiters care about your experience way more than a typo.” However, I know there are people out there in the opposite camp, who believe grammar, attention to detail, and cover letters in general are a big deal.

My opinion is that minor cover letter mistakes don’t matter all that much. 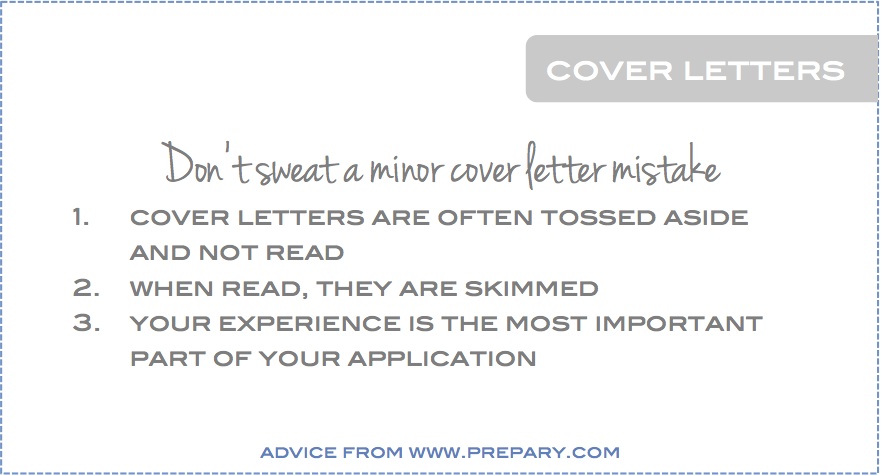 Many times, cover letters are not even read

If you ask a group of recruiters (and I have) you’ll realize that very few read cover letters at all. There could be many reasons why this is the case but I believe the biggest reason is probably because recruiters have time contraints and because of limited time, recruiters prioritize what is most important – the resume. Say the recruiter is passing along a candidate’s information to the hiring manager (the person who is actually hiring this person). It is pretty common to only pass along the resume (or a resume bundle with many candidates at once) and not include the cover letters.

The recruiting process is already long and administrative, and the cover letter sometimes gets tossed aside because the resume gives you enough information to make a call without any supplements.

When they are read, cover letters are often skimmed

Now, this is definitely not always the case. Plenty of people definitely still read cover letters (otherwise, why ask for them?) However, back to the issue of time constraints, when cover letters are read, they are likely skimmed. The reader is probably looking for the key points, and looking for anything that the resume can’t tell them (perhaps passion for the company, or why the candidate chose to take the path they took). Basically, they are looking for the “personality” and context behind the resume. Still, they will read a cover letter very quickly, extracting what they need, and moving on.

For this reason, I don’t think minor errors are easily caught. Note: writing the wrong company name in a cover letter is not “minor” – this is a careless, major mistake, and extremely easy to spot. “Pubic schools” however, could easy be missed.

Your actual skills and past experience outweigh almost everything

This is one of my core beliefs about the the recruiting process and hiring. I can give you all of the advice in the world (and it definitely will help you gain a competitive edge), but actual skills and work experience trump almost everything. Most companies have a very specific set of qualifications in mind when they are hiring. If you meet them (and not many others do) you’re likely to get a shot at interviewing even if you have made a mistake or typo in your cover letter.

Cover letter mistakes can happen in a second – we’re all busy. Experience and skills take years to build, and trump a piece of paper.

As with many job search topics, this is a really subjective one and you may come across people who adamantly disagree and will easily judge someone on a minor error on a cover letter. I personally don’t believe this is a dealbreaker, but in the spirit of giving yourself every advantage possible, (DO) write a great cover letter and check it 101 times for typos. Ask someone you trust to give it a second look. Sometimes a fresh pair of eyes is all you need.