Dealing with stress at work: Will this matter a year from now?

I am lucky enough to have an incredible boss at work who is not only extremely smart and good at what she does, but also gives great advice.

As we were chatting today we talked about stressful moments we’ve had at different points in our jobs and careers. I definitely have fallen victim to stress in the past – I know I take things too seriously sometimes and often make the mistake of getting a little too worked up about things in the moment.

The concept of taking a step back and putting things in perspective has of course occurred to me – but it doesn’t come naturally. I’ve always really admired those who could let things roll of their shoulders more easily, and just move on to the next thing without being too hard on themselves.

There was a chapter in Tina Fey’s BossyPants about this topic. She shares a story of her mom babysitting these two young kids, the brother 7 years old and the sister a little younger. It was their first time being babysat, and after a few minutes the 7 year old started to have a total panic attack and then started to cry. Eventually this turned into a full out meltdown, where he was frantically pacing around the room, and yelling in Greek (between tears) what translated to: 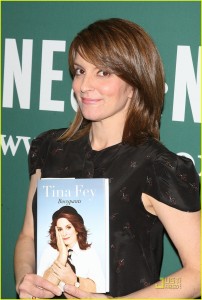 …All because he was being babysat for a night while his parents were at a wedding.

I found this part of the book hilarious – it was the funniest illustration of  what it looks like from the outside when you let stress get the best of you. Fey compares that story to how she felt when she was wondering whether or not to have a 2nd child, balance that with her job, and allowed that to completely consume her (for good reason – huge decision).

Even though my boss and I were talking about stress at work (not personal stress) she had a great piece of advice which I will be taking with me and asking myself the next time I have a moment of anxiety and uncertainty: will this matter a year from now?

When I think back to some of the more difficult, or stressful, moments from this past year, I realize that most of the things I was worried about really aren’t going to matter a year from when they occurred. In fact, many of them didn’t matter a month later (some didn’t even matter the next day).

So I’m going to make a considerable effort to remember this quote (and conversation) for the next time and attempt to move past things more easily and more quickly. I know if I’m able to actually do that, those tough days won’t really be so tough.