How to approach internal transfers

There must be something in the air this week because two separate people have sent in questions about how to approach internal transfers within their companies. I figured why not write a post about it!

Transferring internally within a company you’re already working for can be a great move for so many reasons. It can enable you to take on a job at the next level or allow you to try out something new while having the advantage of retaining all that institutional knowledge that takes so long to accumulate.

While jumping from company to company in short spurts can be a negative, taking on different roles within one company looks more like a stamp of approval.

Basically, internal moves are awesome. I’m all for them — but they can be a tricky to navigate. Here are a few tips if you’re thinking about internal mobility within your company. 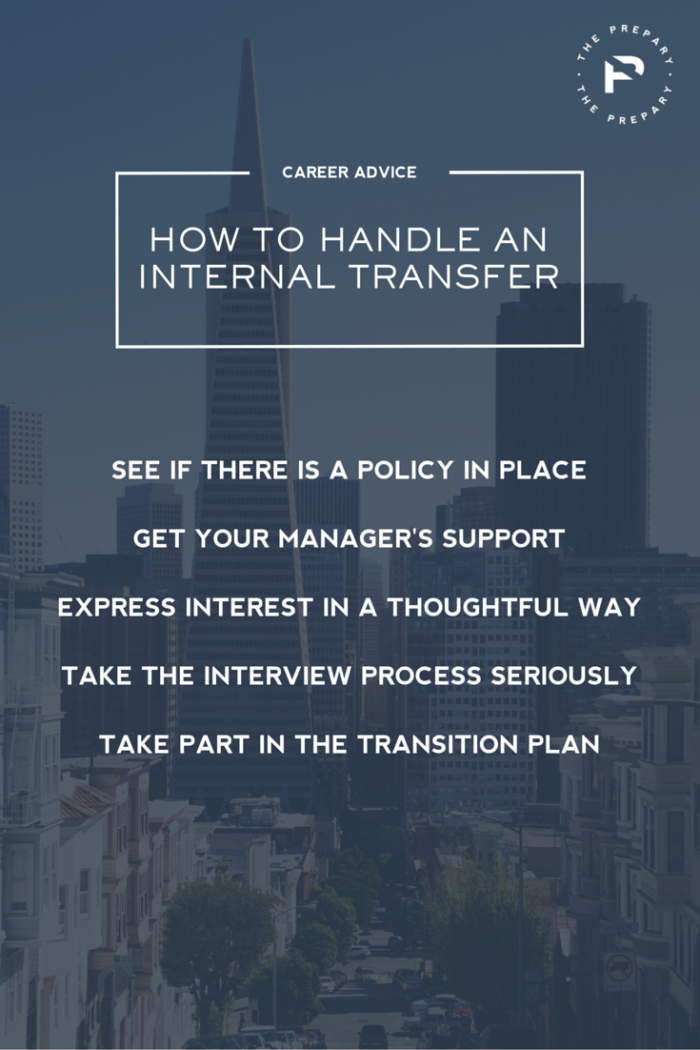 First and foremost, many companies have some structure in place around this exact process. Before you act on anything, it’s good to figure out if there is any company-specific guidelines to follow. As an example, it is common for companies to dictate a certain amount of time you must be in your current role (generally a year) before moving internally.

Companies also often have rules on when and how to approach your current manager about a move. Some dictate that you loop them in right away, get their support, and then reach out to the HR contact or the hiring manager on the other team. Other companies realize that this can be super awkward and allow you to begin the process confidentially and looping your manager in if things get serious.

When in doubt you can ask an HR person you trust or of course have a direct conversation with your current manager.

Regardless of when, you’re going to need to get your manager’s support at some point in order to move forward.

The only way to get endorsed to move into a new role is if you’re absolutely crushing it in your current role.

This is so important to remember because people who are really excited about new roles also tend to become disengaged with what they’re currently working on… and that can’t happen.

Regardless of your relationship with your manager, their impression of you and their overall recommendation is going to be key to your success in moving forward so you have to be performing at 110%.

When you approach this topic with them, I also recommend emphasizing that you’ve been enjoying what you’re doing and working with them, before sharing that you’d like to move. They have to begin to feel comfortable with the fact that you want to move on without feeling defeated or upset.

Express interest in a thoughtful way

It’s critical to be really thoughtful about what roles you express interest in and how often. The throwing spaghetti at the wall approach does not work here — at all.

If you’re going to get support, you need to make sure that your manager and anyone else involved know exactly why you want to make the internal transfer, how it fits into your career goals, and why you think you’d be great at the new job.

If you’re applying to 10 internal jobs a week, it’s going to look like you’re trying to run away from something (at all costs) versus running toward something strategically.

Just because the role is internal and you may already know about the company and team, take the interview process just as seriously as you would for an external job. After all, you will likely be competing with external candidates who are going above and beyond to prove themselves.

Even if you have casual relationships in place, keep things professional during the interview, effectively sell yourself for the job, and don’t assume that your relationship is going to get you through the process. Doing more than you need to is always better than doing less, even if it ends up not being 100% necessary.

Be part of the transition plan (don’t jump ship!)

After you go through a certain number of interviews, hopefully the process ends in an offer to join the new team. When you get an offer from an external company, it’s typical to give 2 weeks notice or sometimes a little but more. However, these rules don’t necessarily apply for internal moves.

Internal moves require a lot of partnership between your old team and your new team and they will come up with a transition plan that is best for the company as a whole. Sometimes this means you’ll continue to work in your old role until that role is filled by someone new. Other times, you might do both roles at once through a transition period. It really depends on the company but the point is that it will be a slower transition than if you were moving externally.

Cooperating and doing what’s best for the company overall will earn you points on both the old and new team and ensure that you leave on the right foot. Keeping relationships strong with your former team will be important as you continue to work in the company and move forward in your career.