Job rejections: Should you ask for feedback?

Job rejections have got to be one of the tougher forms of rejection. The more interviews you go on, the tougher it is to hear the news that a company “isn’t moving forward” or “went with another candidate”. If this is you, you’re probably wondering “why?” yet have no answers in sight. The question then becomes, should you ask for feedback?

While it depends on your relationship with the company, getting feedback on why you didn’t get the job will be incredibly helpful as you continue on in your search. 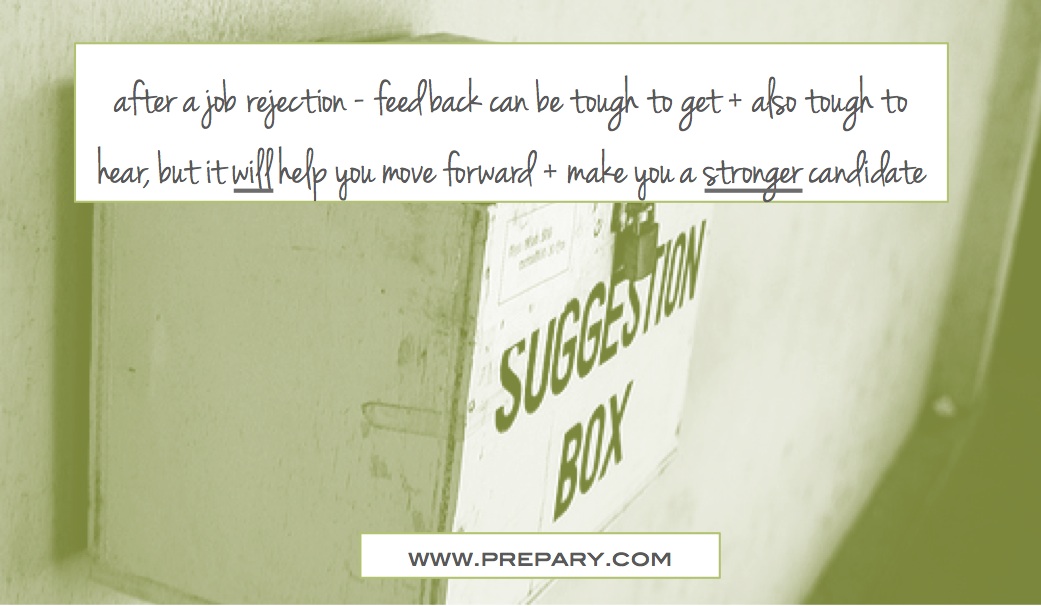 When you should ask for feedback:

The more a company has gotten to know you, the more helpful the feedback will be. If a company turns you down after a phone interview or initial screen, they’ve only spent a limited amount of time getting to know you. Chances are there was something on the surface that made you not the right match for that job – whether it be in skill set, culture fit, or many other reasons.  No harm in asking but don’t be surprised if the answer isn’t very insightful and seems pretty basic.

I’d say the most meaningful feedback you’re going to get is when you’ve gotten to a 2nd or 3rd round of interviews and then get rejected. Here’s why…

If you’ve gotten past the first round it means your skills and work experience are viable for the job – so the reason for not getting the job could be a little more interesting (maybe you talked too much, maybe you came off as disinterested in the company, maybe you didn’t know photoshop as well as the candidate they hired). Knowing that reason (after a 2nd or 3rd round) is a lot more likely to help you the next time you’re interviewing for a similar role.

Who should you ask for feedback?

This always depends on the situation and who you’ve interviewed with but the best person to ask in general would be the recruiter. Not only can they give you feedback from their own interview with you, but they also probably were the one to gather feedback from others.

If you interviewed with one person and it wasn’t the recruiter, just ask the person who you did interview with.

Keep in mind that you won’t always get feedback after an interview. There are various reasons for this but more often than not, the recruiter or interviewer won’t give you anything too meaningful because there are risks in doing so. However, in my experience, I’ve been the most likely to give feedback to someone I have built trust and a relationship with – so those are always the best people to ask.

When should you ask for feedback?

Generally the best time to ask is after you’ve been turned down for the job. It’s usually best to ask for feedback over email versus phone or in-person because people don’t love being put on the spot in this scenario.

Keep in mind, it’s always a good idea to respond to a job rejection to keep the relationship in good standing for the future.

How you should ask for feedback?

Because you’re asking someone to 1. potentially have an uncomfortable conversation, 2. take a risk (legally), and 3. take the time in general to have a conversation with someone they’re not hiring, you want to approach the conversation in a way that is gracious, open,  and not entitled.

First thank the interviewer for their time and consideration. Then give them the option of providing feedback (without demanding it). Something along the lines of “If you do have any feedback for me I’d love to use it to make myself a stronger candidate for the future” is a good way to approach. If you don’t tread lightly, you could come off as sounding defensive, or basically arguing “Why didn’t you hire me for this job??”

Getting feedback and hearing the truth can be really tough. Your natural reaction is probably to get defensive and think “I didn’t sound like that” or “I didn’t say that” or “I totally covered that”, but resist that urge.

I’ve seen clients get feedback that hit them like a ton of bricks (eventually in a good way). They went on to take that feedback to heart and become much stronger candidates. So have the courage to ask, and then really use it to your advantage the next time around.