What does it mean if a job is reposted while I’m interviewing?

It’s pretty common that any interview process is going to stretch out over at least a few weeks and often months. During that time, you might notice that the job posting (for the job you’re interviewing for) gets reposted.  That tends to set people into a panic and they wonder “What does it mean if a job is reposted while I’m interviewing?” 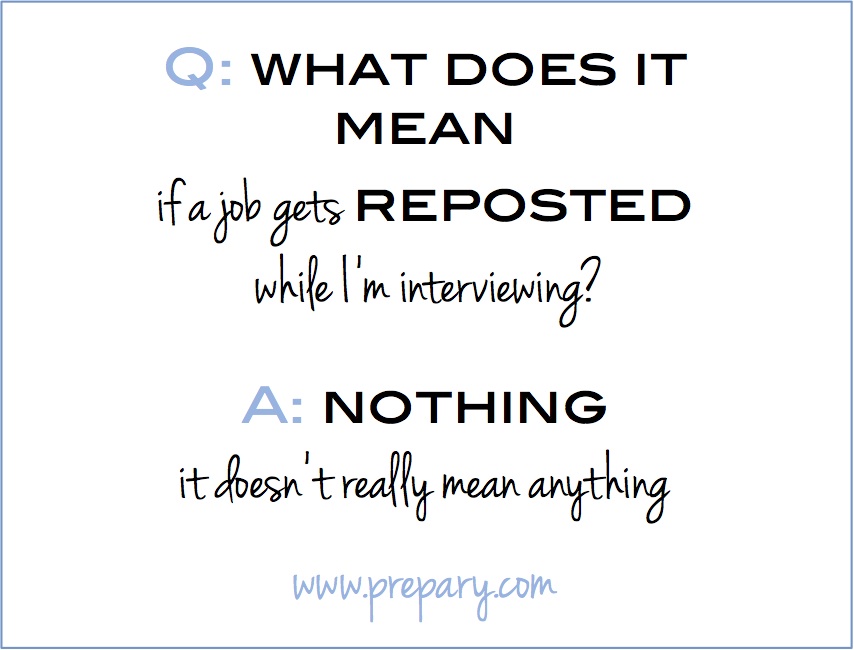 The short answer = nothing.  It doesn’t mean anything.

In my recruiting experience, I’ve found that there are a few reasons why you shouldn’t panic if a job is reposted – here they are:

1. A job isn’t considered “closed” until the offer is signed, sealed, and delivered – Basically, even if the company knows that you are absolutely their number one candidate and they’re getting ready to give you an offer, there is still the chance that you will turn down the offer.  The cautious thing to do is to keep the candidate stream flowing until the day the offer is signed to make sure they don’t put themselves in a vulnerable place.

2. Postings are a routine, “clean up”, task and often done by someone not as close to the recruiting process – On large recruiting teams, the person who is your main point of contact (who knows exactly what’s going on in the interview process) may not be the same person who deals with the postings/unpostings.  That means there can be a delay or lag in information between those two people and something might get reposted even though the latest information would indicate that it shouldn’t.

3. Auto-postings and pre-determined duration of postings – Many sites have a certain amount of time that a posting will stay up before it “checks” if the posting is still up on the company web page.  That’s why sometimes you’ll see postings on indeed but when you click the link it’s “no longer available” on the company site.  Again, the lag can be deceiving!

4. The posting is not an actual job but instead a way to build a future pipeline – Even if a company is about to close a job (and hire you!), they may know that a similar one will be opening up in the near future.  That’s a pretty good reason to keep the posting up or renew it to get a head start on finding some great candidates for the next one.  Many companies post jobs around what is actually open but others have “permanent” postings that are always up to gather candidates on an ongoing basis.

I hope these 4 reasons above has helped you realize that just because a job is reposted, doesn’t mean that you are out of the running for that job.  If you’re wondering where you stand, check out this post about how to write a follow up email.