This post is inspired by a very good friend of mine who has been on a bit of a frustrating job search. Watching him go through it, there were many aspects that were difficult, but of them all, the most frustrating thing was this:

After many successful interviews, and a skills test, there was radio silence (for quite some time). We caught up daily and wondered, “what the heck is taking so long?”

I was inspired to write this post, for any of you, who are waiting to hear what’s next… here’s what it means when you don’t hear back after a job interview. 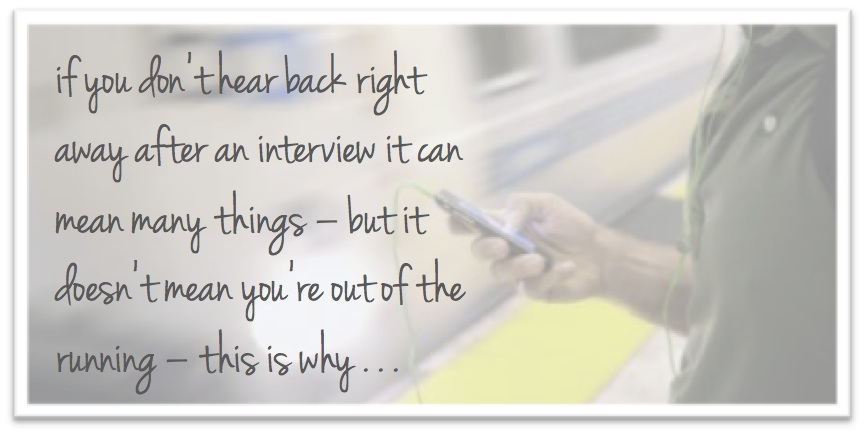 I guess I should start with what it doesn’t mean. If you don’t hear back after a first, second, or final round interview…

If you think about it logically, it makes sense. If the company you interviewed with knows they don’t want to hire you, it’s pretty easy for them to just tell you that versus stringing you along and probably fielding many of your emails/phone calls wondering what’s up. If it’s clear you’re not right for the job, there is no harm at all in just letting you know that.

However, in that moment where you’re driving yourself crazy, wondering what’s going on, most of us go straight to doubting ourselves. Don’t do that – if they wanted to turn you down, they’d just turn you down.

Before you start to hate what I’m saying, read on… It doesn’t mean they’re not sold on you, who you are, and what you bring to the table. It often means they don’t have all the information they need to be “sold” and 100% ready to tell you what’s next.

There are lots of things that stand between unsure and 100% sold even if you had a great interview. It can be anything from budgetary constraints, to seeing how other candidates compare, to waiting to test a certain skill, to checking references, to waiting for someone else to come back from vacation to interview.

Remember that every company has their own process and timeline in the hiring process. There is no one size fits all formula to how long the interview process will take or what it will entail. If you try to guess what’s next or why you’re not hearing back, you will drive yourself crazy. Just take comfort in the fact that if they were sure they didn’t want to hire you, you’d know quickly.

It’s when you’re in running that the time starts to drag.

A few months back I wrote a post about following up after an interview – and when the right timing is. You want to strike the right balance between being eager and excited, yet not annoying. Some people deal with uncertainty pretty well and others start to panic. Even if you’re feeling that panic inside (most of us are) you don’t want to show it, and you don’t want to cross that line.

If a company is on the fence about you as a candidate, bad judgement calls or inappropriate communication is likely to bring them to the wrong side of that fence. Follow up respectfully, listen to what they’re telling you about timelines, and always remind the company how excited you are about the opportunity when you check in.

Even though hearing about a particular job is the #1 important thing on your priority list, it doesn’t mean you interviewers or recruiters are feeling that same pressure.

The pressure is on them to make a thoughtful decision, and not a quick one.

So hang tight, and make the waiting time productive

You’ll most likely get the answers you need in the near future, but sometimes the wait can be lengthy, so if you’re not currently employed don’t stop your process and wait. Put your eggs in lots of different baskets, get more interviews, and continue to put yourself out there. Having multiple options will be the best way to increase your chances of success and help you take your mind off of the waiting game.