How to figure out your salary expectations

There are a few times throughout the job search when you may be asked for your salary expectations and I know people find this tricky. You don’t want to aim too high and accidentally knock yourself out of the process but you don’t want to shoot too low, and then get an offer for less than you deserve.

I get so many questions on this topic, from clients and through office hours from my Conquer Your Job Search course so I thought it’d be worth a meaty post. This is another long one (you may be sensing a theme here) but it’s going to cover anything you’ve ever wondered about this topic. 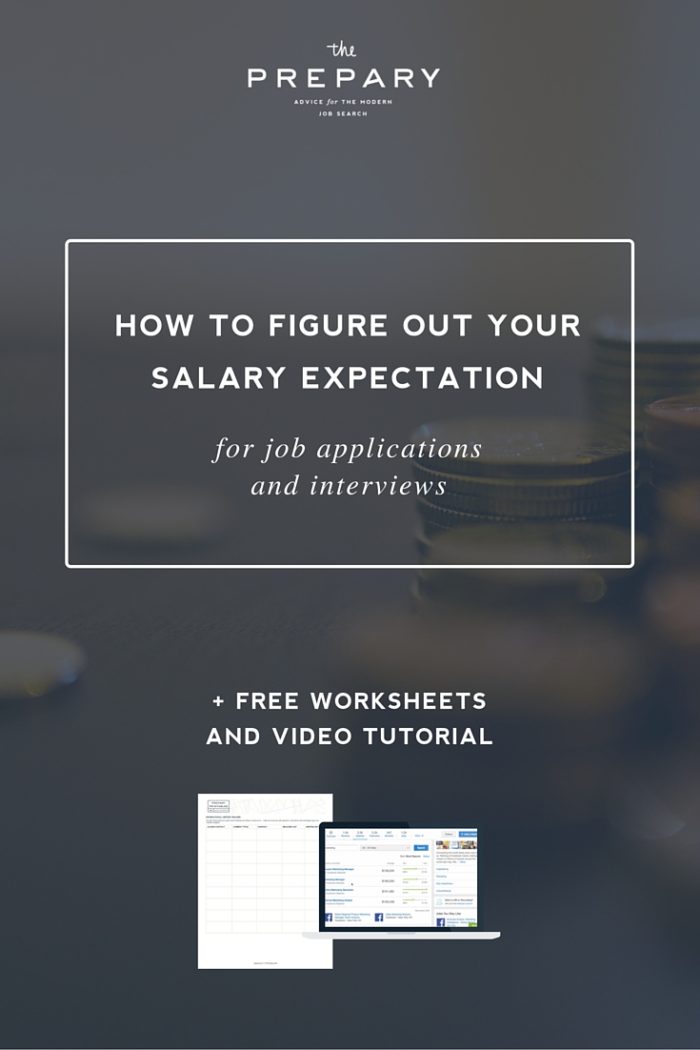 What do they mean by salary expectations?

A salary expectation is essentially what you are looking to earn in order to make a move, typically in base salary. It’s not what you’re currently earning – it’s what you want to earn. In my opinion, this is a much more relevant question anyway.

This question can come up at various times in the process but the two most common times are:

People often ask me if they can leave this field blank on an application or avoid answering the question in an interview or phone screen. I think they have this reaction because they’re worried about being really off-base, want to get more information about the role first, or because they actually want the company to spend more time with them before sharing this.

However, avoiding this question is missing a big opportunity to show that you know what you’re worth and that you’re knowledgable about what you should be earning.

Instead of trying to avoid it, do the research (you’re going to have to do it eventually anyway!) and tackle this head on.

Remember that you’re being asked this for a really practical reason. The company doesn’t want to waste tons of your time (or theirs!) if you’re ultimately not going to want to take the offer they’re able to give.

What if I go too high or too low?

It’s true that there can be real consequences of getting this wrong. If you go too low and play it really safe, you might receive a lower offer than you otherwise would (not always, we’ll get to that later).

What about going too high? People worry that if they put a $ that is too high on a job application they might get knocked out of the process by the applicant tracking system.

While this might be true, do you really want to waste your time going through the interview process for a job that can’t pay you want you want to earn?

Additionally, if you’re following up on your job applications with networking (which I 100% think you should be) you’ll be finding a way around that black hole of a system anyway and then can have an actual conversation with someone about salary instead.

If you are being asked this during an interview by an actual person, you have nothing to worry about as long as your expectation is grounded in reality. If you share a number that is a bit higher than what the company has budgeted for the role, your interviewer will open up that discussion right away and say something along the lines of:

“We actually have a max budget of $X, are you still open to moving forward?”

Then you can say yes or no and if it’s a yes, you know you’re at least going to get an offer at the very top of that budget.

How do I figure out what my expectation should be?

Since I’m telling you this is something you do need to know and be willing to share, let’s talk about how you arrive thoughtfully at a number.

When I say market data, I’m referring to what salary the company (or other similar companies like them) is paying for similar roles. My favorite place to find this type of data is on glassdoor.com. It’s free, it’s easy to use, and there’s tons of data on there.

See below for a quick video tutorial on how to use the site.

As you can see, you may want to start by looking at salaries within the company you’re interviewing with but you should also look to see what other companies are paying for roles with similar titles. Take notes on some of the different data points (we have a worksheet for this!) and find the averages for your industry.

Even if you don’t find the exact job title, look for similar ones. Even when the data is not precise, it can still be extremely helpful.

#2 – Know what you actually want

There’s one piece of data that is 100 times more important than anything you’ll find on Glassdoor and that is what YOU want to earn. If you have a certain number in mind and you know it’s realistic, then you have your salary expectation right there.

This is not something you want to be passive about. You don’t want to sit back and ask yourself, “well what does the company want to pay me?”

Know what you want, know why (especially important for when it’s time to negotiate), and remember it’s your expectation, so it’s up to you!

#3 – Be willing to disclose your current comp, if it helps you make your argument

Last but not least, know if your current compensation supports your ask or does the opposite. If you’re being paid well where you are, you might use those numbers in order to get even more in your future role.

You might say something along the lines of, “In my current role I’m earning $X in base and have an X% bonus, so in order to make a move I’d like to see myself at $X.” Companies know that you’re probably not going to take a step back salary-wise (unless you’re switching career paths) so knowing your current compensation helps you  make your case.

If you know you’re being underpaid in your current role, your response will be a little different and it’s even more important to understand the market data.

If you do, you can say something along the lines of, “I’m currently earning $X, but I’ve done a lot of research and I am aware that this salary is not in line with the market and so I expect to earn $X as part of this career move.”

In addition, you can share any other detail on why you stepped into or stayed in the role, even when it wasn’t paying you competitively. Sometimes there is a good reason for that!

I hope this post helped you to determine your salary expectation so you can write or share that number with confidence! Handling this conversation well is the first step to earning more money in your next role.