Guest Post – My Lesson in Meetings: “Fake It Till You Make It”

One thing I have learned after spending some time in a corporate environment is that attitude and body language can make all the difference in how you are perceived by colleagues and clients. One of my mom’s favorite catchphrases has always been “Fake it, Till you make it” – meaning imitate confidence so that as the confidence produces success, it will generate real confidence.

Well, here’s a little story about putting that advice into action.

I was just finishing up my lunch on a Tuesday afternoon, when I looked at my calendar and saw that I had an important meeting I thought was later in the day, in 5 minutes! I quickly grabbed my notebook thinking, “phew good thing I looked!” as I hurried down the hall to the conference room. Luckily, I was still a minute or two early when I arrived so I took a seat at the table and engrossed myself in scrolling though blackberry emails.

A few minutes later, I heard a familiar, but unusual voice say, “Ok, Let’s get started.” I jerked my head up and there was the President of the company sitting at the head of the conference room table. My heart started to beat faster as I glanced around, and then I started to sweat as I realized, to my dismay, that everyone in the room was a part of Senior Management, including both the President and CEO of the company.

Now, at this point, I would have loved to be able to get up and excuse myself, however I was sitting the farthest you could possibly be from the exit, and I would have had to ask other people to get up in order to let me out, which would draw extra attention and embarrassment. I weighed my options.

My mom’s old catch phrase echoed in my head – “Just fake it till you make it!” I decided that was the way to go – I would stay at the table and pretend like I was supposed to be there. Maybe everyone would think that someone else had invited me. So, I sat up straight, took thorough notes, and paid attention.

At one point the President asked for information that only my team would know. Since no one else from my department was at the meeting, I spoke up and confidently answered the question. The President smiled and thanked me for the information before moving on.

As the meeting continued, I was sure that at the end they were going to ask me what I was doing there and I’d have to own up to my mistake of misreading my calendar but they didn’t.  The meeting ended and no one said anything. I returned to my desk just as an email popped up on my screen.

It was a calendar request – for the senior management meeting the following month.  They wanted me to be there moving forward to fill them in on my department since the head of our department was based on the other coast!  What I thought was a completely mortifying mistake had turned into a seat for me at the big boy’s table. 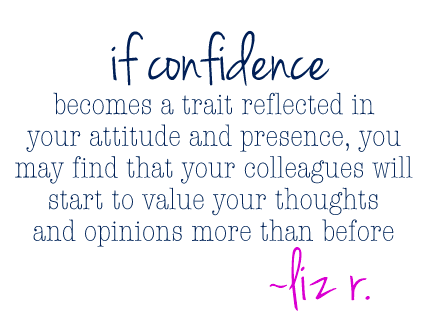 If confidence becomes a trait reflected in your attitude and presence, you may find that your colleagues will start to treat you with more respect and value your thoughts and opinions more then before.  Fake It Till You Make It!