Common Interview Questions: Tell me about a time when you made a mistake

Everyone makes mistakes.  It’s okay if you’ve made them too.  Self-awareness and ownership is more important than a flawless track record. 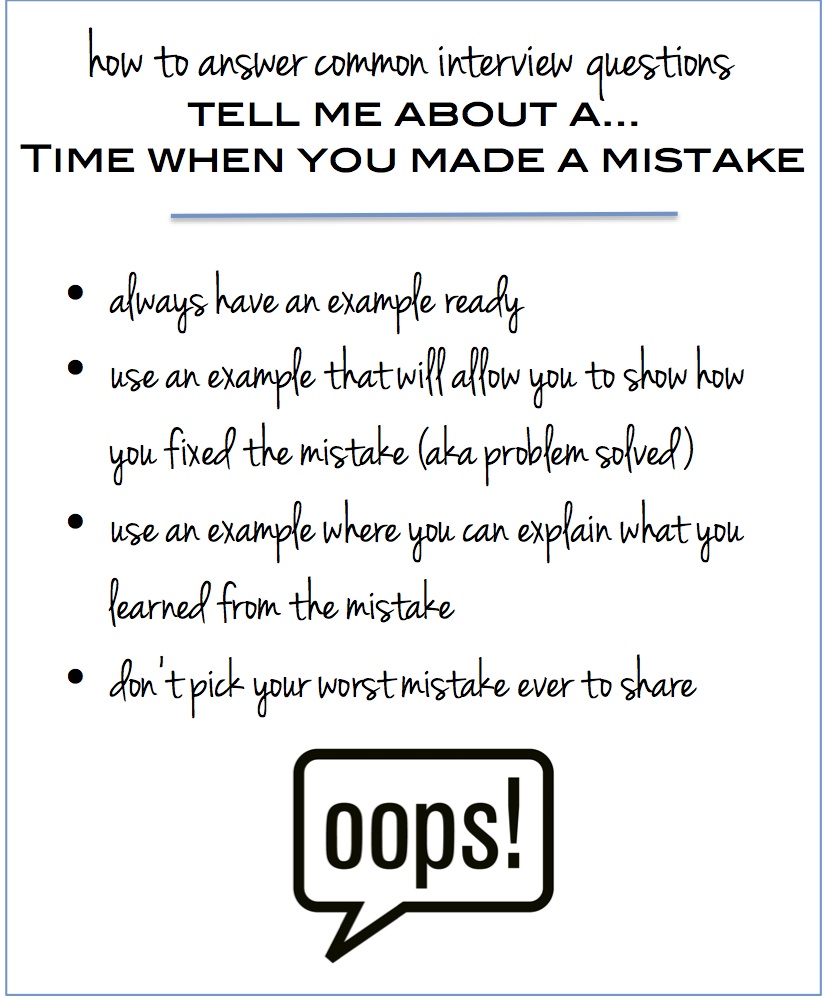 Always have an example ready (that you’ve thought about in advance) so you’re not put on the spot.

As with any questions that are “negative” or uncomfortable, they can be tough to answer.  You are way less likely to share something regrettable if you think of a solid example ahead of time.

Think back in your past experience about times when you wish you would have done something differently or times when you realized an error and had to troubleshoot quickly. Be ready for this one and don’t get caught off guard!

Use an example that will allow you to explain how you fixed the mistake vs. one where it spiraled out of control.

In my mind, there are two types of mistakes:

There are the ones you notice quickly and are able to fix without too many issues and then there are the bad ones — the ones that spiral out of control and have pretty negative consequences.

Don’t worry – we’ve all probably had mistakes in each category and ones that fall somewhere in between. I have for sure!

But in this case, we’re going to use an example that falls to the “easily fixed” side of the spectrum. It is a lot safer.

Explain what you learned from the mistake and how it made you a better employee.

Showing personal and professional growth is something that will make you come across as a stronger candidate, as interviewers are definitely looking for people who can learn from their mistakes and grow from them.

Avoid sharing the biggest mistake you’ve ever made as your example — use one that is slightly more innocent and didn’t have big repercussions.

Of course, too much honesty can come back to haunt you and it is always safer to give a more innocent mistake versus the biggest one you’ve ever made. However, if you don’t think of something in advance, the first thing that will pop into your head is probably the mistake that scarred you the most!

So use your judgement and ask yourself, “Is this going to be a big red flag to the interviewer?” If the answer is maybe or yes, you might want to pick a different mistake as your example.

Here’s an example of what I think is a pretty good response to this question:

One mistake I made was early on in my time at “company X”. I was reporting to a few different people and constantly had people asking me to work on different projects.

One mistake I made was that I took on all of the projects and didn’t let both person A and B know what else I was working on.  Once they understood this, we were all able to be more in the loop and set realistic expectations and deadlines.

When you’re answering this question you want to strike the balance of being honest, but not revealing anything that is too much of a red flag.

You want to show that you know you’re not perfect and have made mistakes, but also that you know how to fix them and grow from them.