How to expand your network to get a job

How many times have you heard something along the lines of “you need to expand your network to get a job”? I know I have.  Until recently, comments like that used to frustrate me to no end because all I could think was “but how?”  It always seemed really disingenuous to me to connect with people for the sole purpose of getting a new job.  A few years later, I think I finally understand “networking” and also have some thoughts on how to do it without feeling like a total mooch. 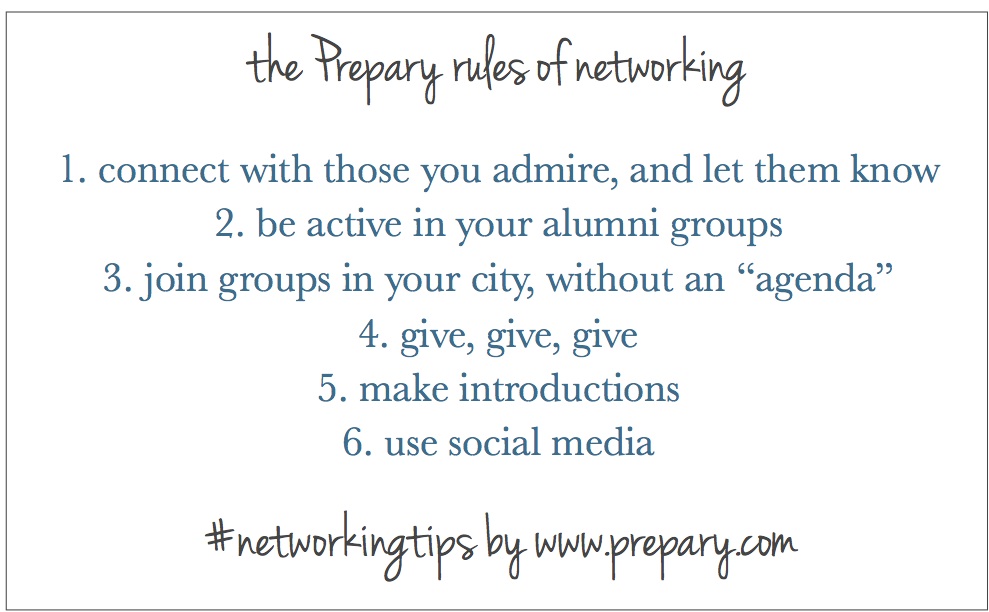 Connect with those you admire and let them know:  I’m sure you have people in your life who you admire.  Some may be friends, family members, or 2nd degree connections.  Others may be people you don’t know at all who’s careers or work you admire from a distance.  Either way, let them know that without necessarily asking for anything in the return.  A quick email saying “I really admire your work/career” is so nice for someone to read.  At first I was hesitant, but after getting used to the idea I reached out to writers, professionals, founders of companies etc. to tell them how much I admired what they were doing.  Not everyone will write back, but I bet it put a smile on their face to read it.  Also, follow them on twitter, facebook, etc. if applicable and comment on their articles or posts.

And if you are able to connect with someone, leave it at that for now.  However, there may be a time in the future that you want to ask for their help or expertise on something related to your career or job search and you’ll have already laid the foundation for that.

Put those tuition dollars to work: I think that people underutilize their alumni network.  I am certainly guilty of that.  However, after my friend Tracy told me a fellow Brown alum (who was a stranger) helped her get her amazing job at People magazine, I knew it was time to change my ways.  People tend to feel a special bond with fellow alumni and are usually willing to stick their neck out without a prior relationship in place.  Not only ask for help through this network, but also help others if you are in a position to do so.

Join groups and be active (without an agenda): Meeting new people through local groups is an amazing way to expand your personal and professional network.  I’ve realized that the best way to do this is without a “hidden agenda”.  Join just to meet people, volunteer, or participate in activities and the career benefits will come later.  Think of how many new “friends of friends” will come along just from entering a new group.

When I moved out to San Francisco 8 months ago, I joined the LocalLevo SF group (which is run by Levo League). I joined purely just to meet new people (as did many others) but I started to notice that people who had just met each other (at say a group Yoga class) were already sharing job opportunities and making connections within their companies.  I see that local community benefiting people’s careers constantly.

Give, give, give: When you start establishing your network, it’s about giving at first.  See what you can do for others based on your unique skill set and connections.  I find that people are so taken aback by this and will look out for you for years to come.  It also feels great to help others and can be extremely gratifying even if they never return the favor (which they will).

Use social media (especially LinkedIn), no one is a stranger these days:  Social media is game changing in the world of networking.  It pretty much opens to the doors to reach out to (and follow) anyone you find interesting or helpful.  People ask me all the time if it is weird to reach out to total strangers on LinkedIn.  I say it’s not, as long as you approach in a friendly and non-aggressive way.  There is nothing wrong with sending someone a message saying “Sorry to connect with you out of the blue but I think you’ve had an amazing career and I’d love to stay connected through LinkedIn”.  The only disclaimer I have here is that professional networking should not really occur on Facebook.  People do get a little creeped out when you try to find them there (if you don’t know someone in common).

Overall, networking is not something you can just turn on or off the moment you need it.  It’s something you build over time, like a relationship.