Resume updates: when you’ve had multiple jobs at one company

I had the pleasure of attending a networking event last night with an amazing group, and got to answer some common questions the job search. There were a few that came up that were worth writing about (so stay tuned) but I wanted to kick off with this one:

When you’ve held multiple jobs at one company, what is the best way to reflect that on your resume? Should you just include the current role with the full date range, or make a separate entry for each of them?

We had 3 recruiters on the panel, and we all agreed on the best way to handle this common issue:

1. List the company one time with the full date range you have been with that company

2. Then, list each job title with the dates you were in that role

3. Under each role, list responsibilities you held – the goal here is to show a progression in terms of what you’ve been working on over time. In most cases, the current job has the most responsibility/ownership and the first one has the least.

4. However, we all know that sometimes titles change but the role itself really doesn’t – I still suggest trying to differentiate them as much as possible. If you can’t, list all the responsibilities under the current role and you don’t need to have bullets under the former title(s) – just dates

Here are a few examples since I know this can be tough to visualize:

When your responsibilities are clearly different… 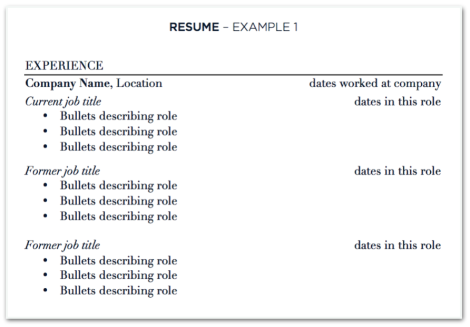 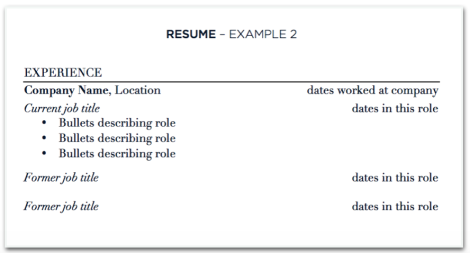 There are a few caveats here:

This advice especially applies when you’re dealing with your current company and job (which is usually the first item in your experience section of your resume and the most important). If we’re talking about jobs from many years ago which are now not as relevant, I don’t think this level of detail is necessary

Hope this post helps solve this common issue. If you need help polishing up your resume and would like an expert perspective, feel free check out some of my consulting services.