I was sitting with a group of former colleagues last week and the topic of how we got our last jobs came up. I happen to have gotten my last job by emailing my resume to a general jobs mailbox and heard back a few days later. I’ve also recruited and hired many people who have applied through online job boards, so it absolutely CAN and does happen.

That being said, if a recruiter is screening through a batch of 200 resumes, the ones that they are going to select randomly are going to be a pretty exact fit for the job which is why networking is SO critical. 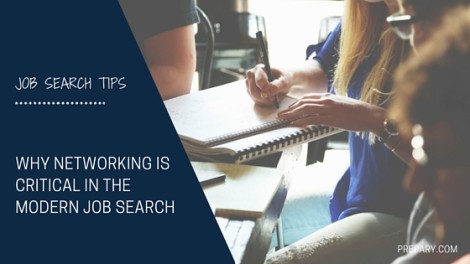 They’re not picking out the person who meets almost all of the qualifications but loves the company, or the person that has related (but not direct) experience. When you only have a piece of paper to rely on, you end up picking out only the exact, logical matches. In some cases, a recruiter won’t even be the one looking and the technology will screen you out for lack of relevant keywords or other criteria that is missing from your resume.

However, many people who end up landing jobs aren’t those exact matches — they’re the ones who have the passion for the company, or the transferable skills that really do translate.

So back to my conversation with two amazing people who got hired on recruiting teams and I can verify, are great at what they do!

One actually got screened out by the person reviewing the resumes because his experience didn’t seem relevant enough. However, after that initial screening he found a contact who knew someone at the company and reached out to them. That person (who was on another team) forwarded his resume over to the recruiting team. Upon second look (and with the endorsement) he got a phone call, came in and interviewed, and landed the job.

The second person’s resume didn’t get looked at in the system at all. It wasn’t turned down or moved forward… it simply wasn’t looked at. Without knowing that, this person didn’t leave things to chance. She found the person who seemed like she could be the manager of the team and crafted a thoughtful cold email about how her experience translated, why she was interested in the job, and why she was excited about the company. The person on the other end read the cold email, opened her resume, picked up the phone and called her on the spot. The rest was history.

I always tell my clients how much of an impact networking makes in the job search and these two stories (and the examples I see of this working all of the time) confirms this for me.

Networking in the job search is critical. If you’re not currently networking after almost every job application, your application isn’t truly complete.

Here are some resources on networking in the job search for you to take a look at:

A story about cold emailing

How did you land your last job? Did you get picked out of a system or mailbox or did you network in some way? Leave us a comment!