I think if people had a crystal ball and could know literally anything about the job search process it would be to know one simple thing… “where do I stand?” Basically, from the time you walk out of an interview, you are left wondering how you did and what’s next.  If you could know in that moment, it would be so much more comforting.  Unfortunately, most of the time you won’t since there will be other factors at play that you might not be exposed to.

However, from my experience, there are a few signs (that can happen during the interview) that may indicate that you’ve done really well.  I’ll start with the most obvious signs and move to the least obvious ones. 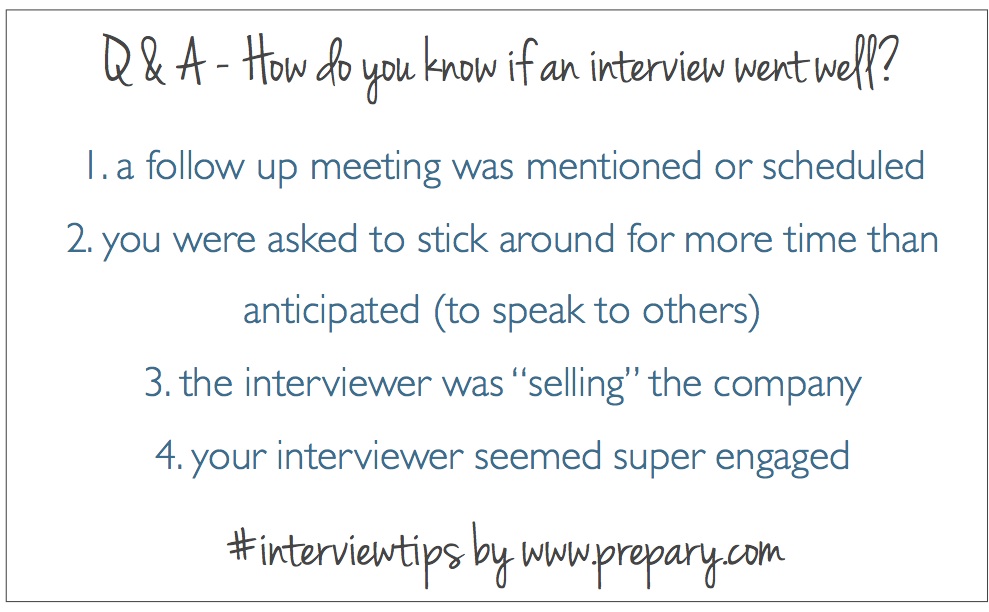 1. The interviewer tries to nail down next steps then & there – Yes, I suppose this is pretty obvious but you pretty much know you’ve done well if the recruiter is attempting to figure out when you can come in next.  This often happens if you are interviewing with the recruiting team first.  They may be able to tell you on the spot if you will be coming in to meet with the hiring manager (your future boss).  They can do this because they are the sole decision maker (at that point) if you’re going to move on to the next round.

2. If they ask you to stick around for more time than scheduled – If the interviewer asks you to stick around to speak to a few more people it is a great sign that the first conversation went well (or at least that they are interested in learning more).  Since you’ve also been put on the spot, it may give off a sense of flexibility and adaptability if you are able to handle the next conversations well (without anticipating them).  That being said, if you’ve taken time out of the office (if you are employed) to be there and need to get back, feel free to speak up.  People will understand that type of time constraint.

3. If the interview felt more like a “sell” – This could mean a few different things but it’s a good sign if you felt like the interviewer was trying to “sell” the company to you and play up its positive attributes.  They may just do this in general – especially if they really love working there – but I think that most people wouldn’t spend the time doing that if they already knew it wasn’t a good fit.

4. The interviewer was really engaged in the conversation – I guess this might be a hard thing to tell because an interviewer is (hopefully) always going to be polite and at least pretend to care about what you’re saying!  But think of it like a first date… you know when the other person is really into it (vs. just being polite) so look at it that way.  If this conversation happened on a first date, would you leave with the impression that the other person was into you?  If yes, it’s likely the interviewer was “into you” too – but as a match for the job.

At the end of the day, you never really know until you know.  So if I had to give one piece of advice it would be this: don’t drive yourself crazy.  Go into each interview, do the best you can, and be YOU.  If it’s meant to be, there will be more rounds in the process.  There is no use in making yourself nuts in the meantime!