When is the right time to follow up after an interview?

After the interview comes the waiting game.  Waiting to hear what’s next is one of the more frustrating parts of the process.

So when is the right time to follow up after an interview if you haven’t heard anything?

There is no single “right” answer to this question… as every company operates at a different speed, and every recruiter has a different approach to following up.  My suggestion though is to follow up right around the one and a half week mark.

The first step in following up is writing a thank you note the day of the interview or the day after the interview.  Thank those who interviewed you and also the person who set up the interview or is coordinating the process.  If you don’t hear back after your thank you, don’t worry – this is NOT  bad sign.  It actually doesn’t mean anything so don’t read into it.

After your interview, it is fair to assume that feedback will be collected and that you as a candidate fall into one of three buckets: 1. moving further along in the process 2. on hold and 3. not moving forward. 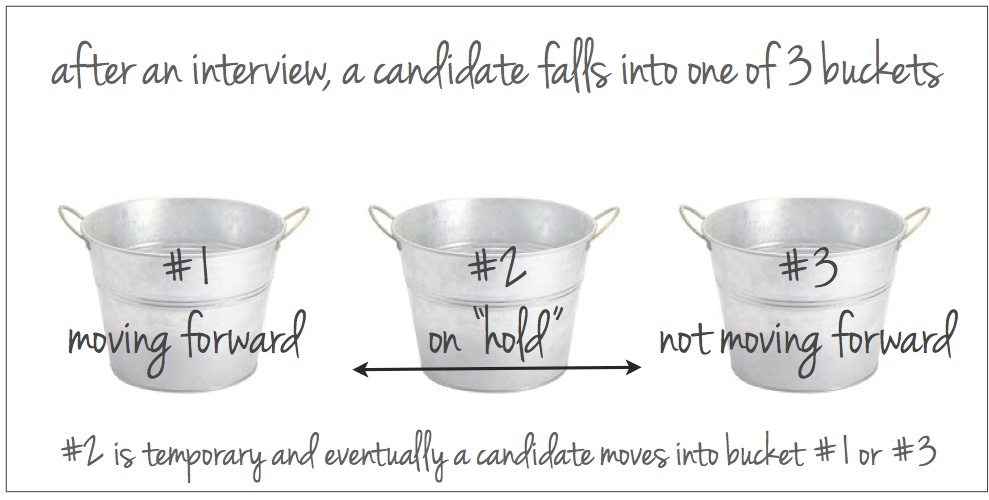 Your goal in following up is to find out which bucket you are in so you’re not just hanging out there.  If you give the company about 1.5 weeks, they should have a good indication of where you are.  If you are definitely moving forward or definitely not getting the job, they should be able to tell you that at this point in time.  If you are in the “hold” bucket, that’s where the process starts to drag.

The “on hold” stage is the most common reason for delayed follow up. Basically your interview went well… and the company thinks you might be a potential candidate for the role but they still want to talk to other candidates to see who else is out there.  As they see more candidates, you will eventually move into bucket #1 or bucket #3.  Seeing other candidates can take a week… or months.

A good recruiter will be honest and communicative with you letting you know that they need some time to go through the process.  Unfortunately, many might just pause on getting back to you until they know more.

The best thing you can do is continue to follow up in 1.5-2 week intervals until you get some sort of indication of where you stand.  I think that increment of time strikes the right balance between being too agressive and not aggressive enough.

Everyone has a breaking point where they just give up because they still haven’t heard back. That is a personal decision and it’s really up to you.

I think after 3-4 attempts to make contact after the interview, it’s okay to give up.  It’s not good manners but you can probably assume you’re not getting the job.  Many people I speak to are so turned off with the company at that point that they’re no longer interested in working there either.

While definitely frustrating to not hear back, I hope this post helps shed some light on what it may mean and how to handle! For more information on how to actually write a follow up email and what it should say, check out this article.