I am thrilled to share the first post in a 3 part series on networking written by the Of Mercer ladies, Dorie and Emelyn. Given that these two actually met at a networking event at Wharton (and then started a business together) I couldn’t wait to hear their tips. Networking doesn’t come easily to all of us… and through this 3 part series, Dorie and Emelyn will share how you can get over your fear of networking and get the most out of your current and future network!

One of the most important things we got out of attending business school was a strong network of peers, teachers, and mentors, a group that has been crucial to us as entrepreneurs. How did we develop these relationships? Networking! 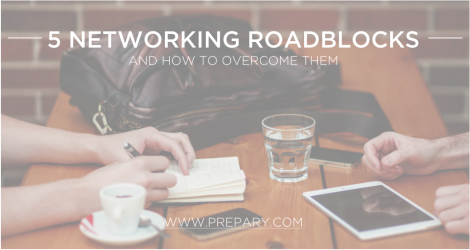 But when we look back we absolutely remember how much we dreaded networking. We thought we could never be good at it, and even if we became good at it, it was still superficial and wouldn’t actually make a difference. If you find yourself in the same camp, read on. Over a three part series, we are going to share the lessons we learned at business school on how we changed our attitude and learned to network effectively. Whether you are looking to start networking or hone your skills, we hope these lessons will help.

Part 1: Get in the right mindset

Before you can begin to be an effective networker, you need the right attitude. In our experience, we found there are five common misbeliefs that hold people back from networking. Whether you identify with one or all five, addressing these roadblocks is a key first step.

Networking will be something you do continually over the course of your career and having the right attitude from the beginning will make it a more seamless and effortless part of your daily life.

Next up on our Networking Series: How to effectively reach out to and “cold network” with someone.

*Featured photo via the Of Mercer Fall/Winter Lookbook

Dorie Golkin Smith and Emelyn Northway co-founded Of Mercer, an online brand of stylish, desk-to-dinner career clothing for women.  The pair are 2013 graduates of the Wharton Business School, where they met and came up with the concept for Of Mercer after showing up to an early networking event in the same boring work dress.  Prior to attending business school, Dorie worked in management consulting, and Emelyn in private equity and investment banking.